Somehow, back about two years ago when we were doing data entry from lists and spreadsheets we ended up with a LOT of duplicates in the Czech Republic. Unfortunately there appears to have been two data sources separated in time by about 4 years. Thus some of the duplicates are shown in more than one location. We’re working on clearing these duplicates up, and do apologize for our tardiness in noticing this.

Another locomotive that came to our attention via commons.wikimedia.org. Added to our database today, along with the photo below:

Posted by steamguy261 on January 28, 2012 in Interesting Locomotives

It is always a pleasure for me when we discover a locomotive that exists, but wasn’t in our data base. The website commons.wikimedia.org has been a fertile source for such discoveries, and today was no different. We added CSD 317.053 to our database, along with a photo by Honza Groh. A derelict locomotive, to be sure, but a steam locomotive nonetheless.

Posted by steamguy261 on January 28, 2012 in Interesting Locomotives

We had long carried the status of this little locomotive as ‘Unknown’, but recently received information that it is indeed operation at Longueville, France. We updated our database (and hence the website) and present the photo below for your enjoyment.

Posted by steamguy261 on January 22, 2012 in Interesting Locomotives

A number of these locomotives (wheel arrangement 0-4-0VBGT in our database) still exist. Presented below is a  photo of one at the Ironbridge Gorge Museum in Telford, Shropshire, UK. The photo was contributed by Phil Horton who accounts for fully one-eighth of the photos here, and shows a partially disassembled example of this type:

Steve Frost, our European Editor, wrote the following comments about this little locomotive:

Whilst it is sad to see the remains of this loco in this condition, it does give us the chance to see the works that are usually hidden from sight in a Sentinel.

Notice the vertically mounted 2 cylinder steam engine, as used in their steam lorries, where it was mounted horizontally. The chain drive is clear to the left and the inner part of the flash boiler is revealed. You can see where the cross tubes that run through the central flue would be fitted.

So many Sentinels survive with the casing, so might they restore it as a cut away example to show how they worked?

Steamlocomotive.info’s page for this locomotive is at Sentinel Locomotive

Posted by steamguy261 on January 21, 2012 in Interesting Locomotives

We’ve emailed the museum in hopes of securing the contribution of a photograph which we can use to illustrate the locomotive.

NOTE: The nice folks at the Collier County Museums were kind enough to provide us with a photo of the locomotive. It is shown below:

It is my pleasure to call your attention to the unique little locomotive shown below. The Laxey Mines Tramway “Ant” has an information page on our website. The photo shown below gives an excellent idea of the size of this locomotive. 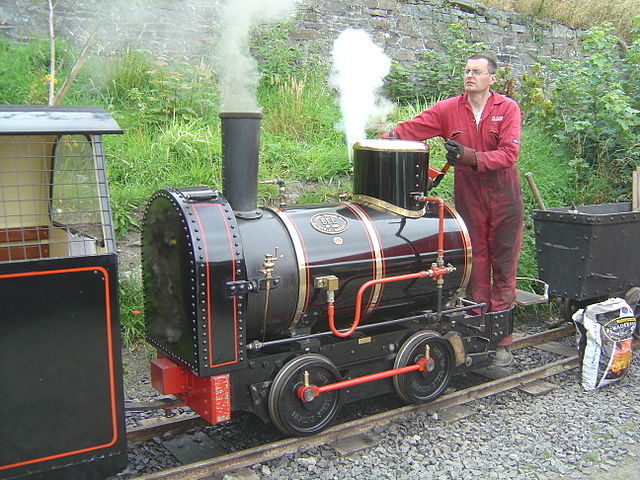 This photograph taken by myself, Optimist on the run. (Own work) [CC-BY-SA-3.0 (www.creativecommons.org/licenses/by-sa/3.0) or GFDL 1.2 (www.gnu.org/licenses/old-licenses/fdl-1.2.html)

Ralf J. Winter contributed the photo below of Alco C/N 62542, a 1920 product of Alco Schenectady on display at the Hotel Pesquero in Holguin, Cuba. Coincidentally, this now marks a total of 7500 steam locomotives worldwide for which we have photos, still searching and researching. Have a Happy New Year! –Doug

Posted by steamguy261 on January 1, 2012 in Uncategorized

At some point in time when I was writing new code to handle the creation, deletion and editing of locomotive information, I created a test locomotive that had no basis in actual fact. It was a Borsig 0-6-0T located in the fictional city of Blargh, Albania.

Regrettably, while I finished the code, I never got around to deleting this imaginary locomotive. It would, of course have gone long unnoticed until somebody let me know I had the construction number wrong. The imaginary locomotive has been deleted, and I’d like to apologize for leaving it there so long.