The Umekoji Depot Museum (now known as the Kyoto Railroad Museum) has long been home to operational steam. I had been unaware as to how much of their collection was operational until a recent Note from a site visitor (Yuki Taki) that outlined their status.

Locomotives in Japan can be operational, but not certified for mainline use. At Umekoji we have the following locomotives:

Posted by steamguy261 on June 30, 2017 in Interesting Locomotives 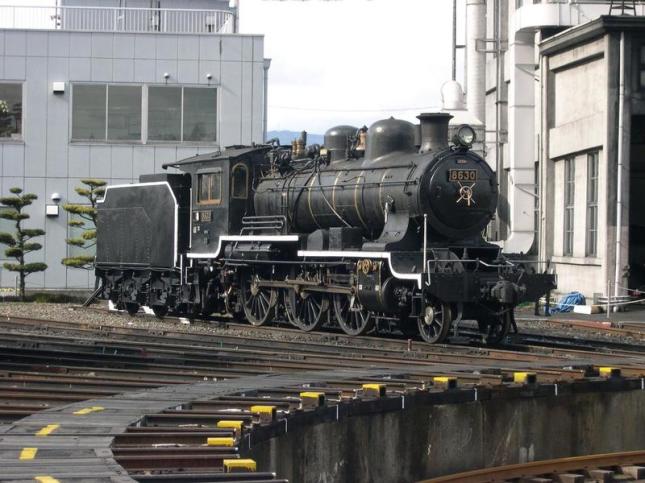 8630 is operational, albeit only within the Umekouji Depot premises. She is an unusual loco in Japan, in that she is equipped with a bell (just between her steam and sand domes). Also interesting to note that this locomotive belongs in the first batch of 52 Class 8620 2-6-0s introduced in 1914, which means that as-delivered, her running boards were not divided into two stages and she would have had the earlier, less sharply curved cab. Her cab and running boards are speculated to have been replaced by that of a retired member of her class at some point in her career.

Posted by steamguy261 on June 30, 2017 in Interesting Locomotives

In the course of running this website, I’ve encountered steam locomotives that have come to odd places at the end of their lives. In South American there’s a locomotive that has been converted into a very large pizza oven. And in Russia there are a couple of 2-10-0s that have been shortened to their smokeboxes, and pilot truck and displayed in parks emerging from pseudo-tunnels or in one case a simple brick wall.

So it was, long before I’d seen a photo of this locomotive, I received the following description of it:

Er762-27 the middle part of the boiler was disposed of, the firebox was attached to the smokebox and used as a incinerator unit on 4 wheels from the 0-10-0 cut down frames.

I shrugged my shoulders, and said to myself, “Well that’s odd.” And thought little of it, until I encountered this image from Dmitri Zinoviev’s wonderful website, http://www.parovoz.com.

It is precisely what it looks like: a mobile incinerator on four wheels. The smoke box has been grafted directly to the firebox, and comments on parovoz.com indicate that this is precisely what this contraption was used for.

Posted by steamguy261 on June 29, 2017 in Interesting Locomotives

Somewhere around 4:20 am, on June 25th, I made a colossal mistake, more through over-confidence and exhaustion, than incompetence, though that played a role as well. There are two fields in the database record for each locomotive, labelled ‘State’ and ‘Fullstate’.  The idea for these fields was that we’d be able to have a state or province, and its proper abbreviation. ‘Minnesota’ and ‘MN’, for example.

So, what did I do? There was a locomotive in Russia that was listed in the wrong province. Rather than using the site’s administrative interface (slow and clumsy) to fix it, I decided to edit the database directly. And I correctly set up the State and Fullstate values for the locomotive in question. And applied the change to the entire database instead of to the one locomotive I’d planned on fixing. This had no impact on countries where the two fields weren’t in use, but for Russia, Canada, the United States, South Africa, the United Kingdom, Germany, Japan and Australia it was catastrophic. Essentially 10,689 locomotives suddenly became invisible on the website. If I editted the record for a locomotive to put the correct values back in those fields, it reappeared with its data intact. But the prospect of hand editting 10,689 records was somewhat daunting.

I opened an emergency support ticket with my hosting provider, and confusion ensued. They were intially of the impression that they were backing up our database nightly, but literally couldn’t find the backup files. After some hours, some discussion and a fair bit of self-loathing, I sat down and began the hand editting process. After a bit, I got a pretty good feel for how fast I could do this, and my initial estimate was that the site would be back to normal in about 3 months. So I sat down and began writing a tool to speed up the process. About midway through the writing process I got an excited phone call from the hosting provider stating that they’d found the backups, that they were about 27 hours old and did I want them to restore the database? Yes. Oh heck yes! Si. Da. Jawohl. And they did.

The website and database returned to the precise state they were in at 1:30 am on Jun 24th, 2017. If notes were posted, links or photos added, or even locomotives added to the site between the time of the backup and the time of the mistake, they were gone. Fortunately it was neither difficult nor tedious to re-enter most of it. And the prolific user of Notes, ILFORD, who has provided a vast quantity of useful information, simply reposted the information that disappeared.

So, the site is caught up, the database is clean and tidy, and I’ve developed a set of stored procedures that will protect me from myself. Thanks for your patience.

And to those of you who didn’t notice: you need to visit us more often (that’s supposed to be a joke).